Follow along as we go behind-the-scenes with Nashville based commercial, editorial and LGBTQIA portrait photographer, Lia Houchens, as she photographs performer Spectra Cosmos!

What was the concept of this shoot?
June is nationally recognized as Pride month. As a photographer who almost exclusivity photographs the lgbt+ community and marginalized people. I wanted this shoot to highlight a familiar subculture that was familiar to the general public. Drag queens are often seen as sole entertainment. But I wanted to highlight the artistic aspect of the drag community especially here in Nashville, TN.

Why did you choose the lighting setup that you did?
I wanted to produce broader, diffused lighting on my subjects face. When you are photographing a drag queen I believe that the face is a priority. So by using two parabolic umbrellas paired with Paul C. Buff’s Einsteins, I was able to put flat light on Colby’s face. As well as putting another umbrella above his head to fill in with some light.

What do you love about Paul C. Buff, Inc. products?
Paul C. Buff was the first brand I ever used in a studio. I was taught how to use the AlienBees at Nōssi College of Art. Having a versatile, and easy to use, strobe changed the way I created images. Paul C. Buff products are also very easy to travel with, I don’t have a set studio that I work out of, so having gear that I can transport so easily takes some stress out of my job.

What advice do you have for other photographers?
Focus on the eyes when shooting, being someone who exclusively photographs people and their faces I can’t think of a better way to guarantee focus on the face. The face is the most important part of portraiture. You’re telling a story.

Who/what inspires you and your work?
I take a lot of inspiration from Courtney Charles and Steph Grant both are LGBTQIA oriented photographers and have two completely different backgrounds that I strongly relate to. But I’m definitely the most inspired by my community and the extraordinary people I’m able to work with and learn from because of my job. 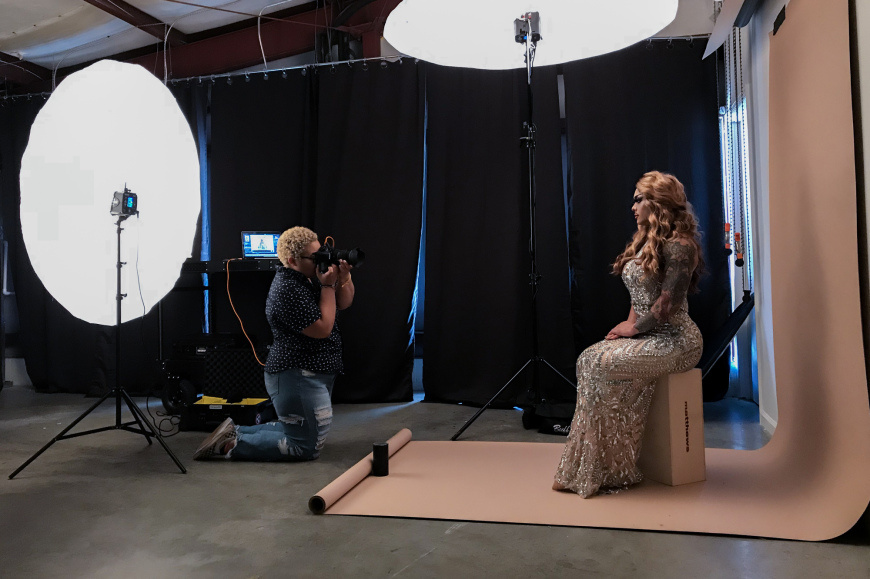 What is your process like leading up to a shoot?
The process leading up to this shoot was that I worked very closely with Colby when putting it together. I knew I wanted to shoot him as a drag queen, and as elegantly as possible. So we started with the wardrobe and worked together on deciding on dress style and color, as well as the wig and accessories. After deciding on wardrobe, I started to look at the option with backdrops. Normally I try to use canvas backgrounds or shoot on location. But for this shoot, I didn’t want the background to distract from Colby. This resulted in using seamless paper by Savage Universal in the color mocha. This background flattered Colby’s natural skin tone as well as the gown.

Do you have a “go-to” lighting setup?
My go-to lighting set up usually involves either a beauty dish or a small Paul C. Buff Octabox. I’m a big fan of pairing my strobes with ambient light. But it felt great getting back into a studio for this particular shoot with Paul C. Buff!